Maharaja Agrasen College, an environmentally conscious institution strongly advocates the concept of sustainable development. It was the first college in the University of Delhi to calculate its carbon footprint-the first step in its commitment to become a carbon free institute. In its endeavour to make and keep our environment clean and green and provide sustainable solutions for environmental problems, the college has taken the following measures:

The college has worked towards the above stated GREEN objectives through an active role played by two student bodies/ clubs namely:

This study was based on a primary sample of 450 plus students, teachers and non-teaching staff of the college. The carbon map of the college showed five major activities: transport, electricity, paper usage, food consumption and waste disposal that emit 1003 metric tonnes of carbon dioxide every year. Transport with its share of 47% is the largest contributor to the college’s carbon footprint; very closely followed by electricity (46%). Food consumption within the college campus accounts 3% to the total carbon dioxide emitted and paper about 2%. 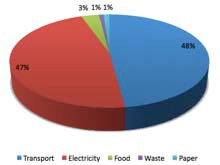 This exercise not only made the learning community at MAC aware of its activities that were most damaging to the environment but also encouraged us to put in place several offsetting measures that enable us to reduce cost by more judicious deployment of our material and resources. In 2013, Maharaja Agrasen College was awarded the Best College Award by the University of Delhi for its good practices wherein we showcased our concern and commitment towards the environment and the initiatives taken in that direction. The Award was given by the Secretary, Ministry of Human Resource Development, Government of India, on February 24, 2013, in the presence of Vice-Chancellor, University of Delhi. Thereafter, The Zero Impact Club (ZI), evolved the following indicators for environmental monitoring:

The students enrolled in the clubs regularly study the above indicators and give suggestions for its improvement from time to time.

1. Energy Efficiency and Renewable Resources: (Indicator 1 and 2) • Campus Energy Usage Monitoring and Reporting The focus was on the overall yearly and monthly electricity usage as well as usage per department. By installing sub-meters at various places, we are monitoring the energy consumed in the laboratories and plan to map it with the time table. • Solar Energy (Sonergy)
Zero-Impact on Environment' (ZI) Students club, Maharaja Agrasen College, in its continued quest to encourage efficient energy use in the college plans to harness the sun’s rays to power the college by generating energy using renewable energy sources to encourage efficient energy use. With more than 300 sunny days a year, ‘Zero Impact on Environment’ Students’ Club plans to capitalize on Delhi’s exemplary weather by installing around 10KW of solar panels on college rooftop and parking structures to create ‘Zero Impact on Environment’ by saving energy consumption from conventional energy sources and thereby decreasing our carbon footprint on environment. A solar panel of 1KW has already been installed on the roof top in the first phase of the project as a humble beginning towards a major goal. The energy generated using the solar panel is being used to illuminate laboratories of Department of Electronics. • Solar Charger: In its continued mission to create ‘Zero Impact on Environment’ by saving energy consumption from conventional energy sources and thereby decreasing our carbon footprint on environment, a mobile charger has been made by the students, which uses solar energy. The solar charger is placed in the corridor adjacent to the electronics laboratory for the students to charge their mobile phones. 2. Paper Consumption Monitoring and Reusing Paper (Indicator 3) Minimize the impact of paper use by improving the environmental characteristics of purchased paper and by lowering total paper use. • Paper Policy @ MAC suggested by ZI: • Recycling/ Reusing Paper The ‘Reusing Practical Files’ project under the ‘Zero Impact on Environment’ Students’ Club is another small yet significant step to reduce our negative impact on environment by reusing practical files used by the students in their practical reports. Under this project, the cover files are segregated, reprocessed with new customized cover and then issued to students for reuse. If the files are not reprocessed and reused, then the total number of files used in three academic years (six semesters) is approximately 1200. If we manage this with 200 files, reusing them for three years (assuming that a file has a lifetime of three years), we are saving a 1000 files! Moreover, this process saves students’ time and money. If they still decide to purchase from the market, they lose both. The project has been launched in Department of Electronics and proven successful. • Electronic Waste Reuse The college collects all its electronics waste and segregates it into useable and not useable components. The re-useable components are used in the eKitchen club. 3. Indoor Air Quality (Indicator 4) Some classrooms in the college have been redesigned as there was no cross ventilation in them. Design flaws were identified and suggestions made for their rectification. 4. Grounds Maintenance (Indicator 5) The students were divided into 8 groups (G1 to G8) and assigned and area which they had to upkeep. They took care of the cleanliness of that area and approached relevant authorities for remedial action. The students were also advised to grow native plants that were suited to north Indian climatic conditions in their respective areas. 5. MAC Pedal Power (Indicator 6) The club maintains bicycles that are issued to the children with the objective of providing last mile connectivity between the college and the metro station. The bicycles are used by the residents and also by sportsmen to travel to the nearby stadium. The green alternative saves both the costs and time for our students. 6. Awareness (Indicator 7) In its initiative to sensitize the MAC community towards environmental concerns, the MAC INSERCH (Maharaja Agrasen College Initiative for Shouldering Ecological Responsibility and Conserving Heritage) has been organizing various programs like tree plantation drives in the campus, Poster-Making and ‘Best from the Waste’ competitions. It also organizes National Conferences on Biodiversity and Climate Change every year. The Zero Impact on environment Club with its motto ‘To live in harmony with natural environment is everyone's responsibility, and starts with understanding these issues’ is an initiative designed to bring awareness about our environmental responsibilities and to well educate the MAC student community. To educate our future leaders and advance green practices in Maharaja Agrasen College, ‘Zero-Impact on Environment' (ZI) club has been organizing an Annual Green Quiz Competition every year in February to generate awareness of environmental responsibilities amongst learning fraternity